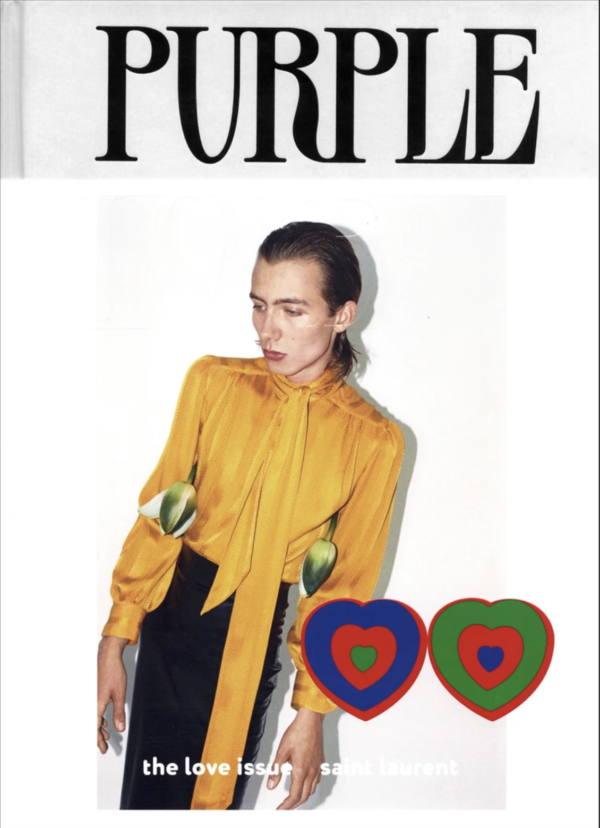 Purple Fashion is the avant-garde reference for fashion, style, and contemporary culture with the usual big names. Purple magazine issue #34 is dedicated to love and features sixteen covers. Unfortunately it is not possible to buy a specific cover.

Art may or may not inspire love, but love could be a source for art

This issue does not try to reaffirm love as a moral or traditional value. Rather, it explores different kinds of love, new representations of love between people of all genders. What might be a new figure of love, beyond the couple, beyond duality, and also include freedom, multiplicity, intimacy, secrets, complexity, vulnerability, gender fluidity? In this regard, how is the feminist revolution radically changing our idea of love?

‘In this period of pandemic confusion and anxiety, love has become a resource.’

Love is for everyone. A person can love their community as a family, the beauty of which recalls the synergy of one plus one becoming many. That’s the power of love. Love is a human obsession. Love is transformative, but it’s always personal. It’s about one person changing another person’s life, and vice-versa. This is especially true in so-called successful couples. John Lennon’s song “God” ends with, “I just believe in me / Yoko and me.” He doesn’t believe in people, just love.

Purple Fashion is a magazine that knows that having personality is about more than just being extroverted. Published in Paris under the eye of its charismatic Editor-In-Chief, Olivier Zahm, each issue is as decadent as his lifestyle is reported to be.

Explore different kinds of love and new representations of love between people of all genders with Purple Magazine: The Love Issue. Available at MENDO.

About Time: Fashion and Duration

Musings on Fashion and Style by Kate Moss