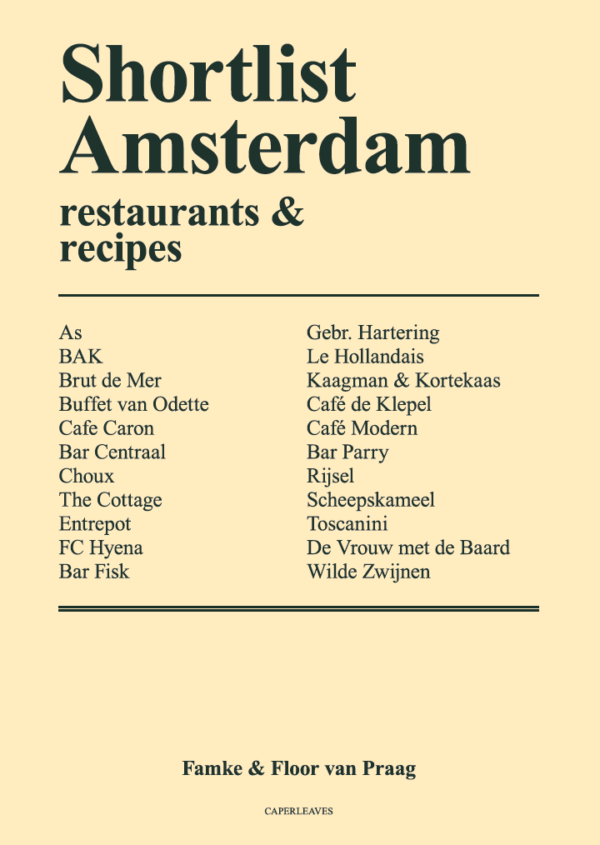 Amsterdam’s most special restaurants together in an iconic cookbook: Shortlist Amsterdam. Instead of highlighting conceptual flashes in the pan, fleeting hotspots or formal fine-dining establishments, this beautifully designed book focuses on 22 authentic restaurants that will never grow stale.

The owners of Gebr. Hartering

Amsterdam’s culinary scene is thriving, yet it’s almost impossible to keep up with so many new restaurants opening their doors. After years of tasting dishes and reviewing pretty much every restaurant in Amsterdam, food journalists Famke & Floor van Praag have compiled their definitive list of all-time favourites.

The 22 restaurants and culinary cafés have been selected because the food is so utterly delicious, but also because the wine list is perfect, the staff leave nothing to chance, and the vibe is outstanding.

The 22 restaurants and culinary cafés have been selected because the food is so utterly delicious, but also because the wine list is perfect, the staff leave nothing to chance, and the vibe is outstanding.

Amsterdam’s most special restaurants together in an iconic cookbook

The owners of Choux

The cookbook is a genuine homage to these uncompromising places, with stunning photography by Petrovsky & Ramone.

The sisters Famke van Praag (1973) and Floor van Praag (1974) have been writing about food for more than 15 years, for magazines such as ELLE Eten, Uitkrant and KLM’s Holland Herald. They have also written several cookbooks. With their upbeat style and superbly accurate observations, they manage to capture a restaurant’s true essence.

The Sommelier’s Atlas of Taste