M Made by
Books

‘Streets of…’ the collection 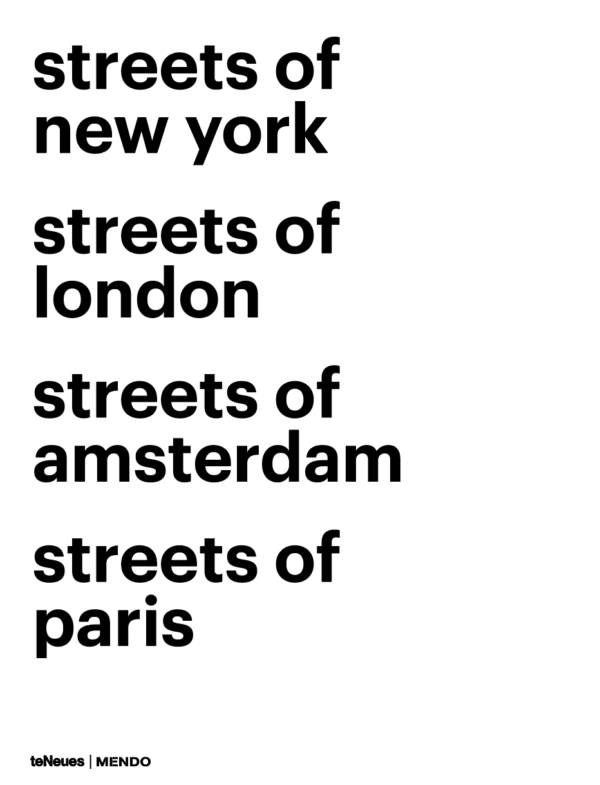 The Streets of… series, are a series of books that offer a contemporary take on the classic city photo book. The series contains: Streets of New York, London, Amsterdam, and Paris. The price per title is € 50. This set of all 4 titles is € 150.

MENDO exclusive offer: all four books for the price of three € 150

#1
Streets of New York
The Streets of… Series kicked off with New York City, a metropolis visited by more than 60 million people each year. Every single traveler experiences the city in a unique way. There is no such thing as one New York. Streets of New York is a New York photo book that celebrates the Big Apple’s tremendous diversity by bringing together 40 contemporary photographers and their multiple perspectives on this unique metropolis.

#3
Streets of Amsterdam
The third book in the Streets of… series is yet another contemporary take on the classic city photo book, and this time it’s wholly dedicated to MENDO’s home base: Amsterdam. Knowing the city by heart, we’d like to introduce you to a visual and kaleidoscopic collection of Amsterdam’s beauty, as captured by more than 40 native and international photographers.

#4
Streets of Paris
As one of Europe’s most vibrant cities for art, fashion, and culture, it’s challenging to capture the multifaceted city of Paris from the perspective of one lens. Therefore, Streets of Paris bundles the work of 37 photographers, both Paris natives and visitors alike, who roam the thousands of Parisian “rues” to capture multiple points of view.

Shop the entire series of four books, and pay for three € 150

More Made by MENDO

This Is Not A F*cking Street Style Book